The good thing about being late with the Jukebox last week means you get a whole new playlist just five days after the previous edition! Now, isn’t that just awesome?

This past Friday saw the release of some really great albums. So, in my half of the playlist, I’ve included brand new music from YG, Red Hot Chili Peppers, Mitski, and Radiohead.

And rounding out the 20-song playlist this week is a handful of tracks from artists like Phoenix, Flume, and The Temper Trap.

END_OF_DOCUMENT_TOKEN_TO_BE_REPLACED

Welcome to Basement Dwelling, where I review new records that should be on your musical radar. What sets Basement Dwelling apart from other music review columns is that these are all albums that are currently residing in my record collection. No promo copy was given, no stream was listened to. Instead, a physical copy of an album was purchased before I listened to it. Don’t think of me as a critic, but as a music obsessive looking to open a dialogue about some of the best tunes that are currently being released.

What makes listening to a new Radiohead record always such a great experience is the amount of layers you have to unpack. Whether it’s a sonic texture you didn’t notice the first time, or a lyric that you didn’t quite catch from Thom Yorke’s sometimes garbled vocal delivery, there’s always a level of depth and greater meaning to uncover and appreciate in every Radiohead record.

The last time around, on 2011’s ode to sampling and loops, The King Of Limbs, the band proved this in a record that felt pretty skeletal but showed how much great songwriting you can get out of studio manipulation. It felt robotic, which works in the tone of that particular record. Radiohead, being masters of never making the same record twice, have switched things up again, with a record that doesn’t feel so robotic this time around. In fact, it’s quite the opposite.

END_OF_DOCUMENT_TOKEN_TO_BE_REPLACED

The Infinite Canvas Podcast train keeps on rollin’ with the tenth episode!

This time, Dan and Mike talk about issue 14 of Southern Bastards, Radiohead’s latest LP, and Uncharted 4. Last but not least, they give a spoiler-filled review of Captain America: Civil War. 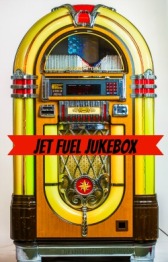 It’s Tuesday, everyone! That obviously means that Jake and I have added 20 new songs to the Jet Fuel Jukebox!

I’ve noticed that I’ve been featuring a lot of the same artists week after week, so I’m making it my mission to find at least a few new artists to put on each edition of this playlist. This will not only help you find new artists, but it’ll also be a good excuse for me to seek out new music.

Our other Jukebox editor, Jake, is celebrating the end of the school year and the beginning of summer break by including a bunch of summer-oriented songs. Get in the summer spirit with his 10 songs!

END_OF_DOCUMENT_TOKEN_TO_BE_REPLACED

This is a very special episode of the Infinite Canvas podcast, as Dan and Mike venture into a brand new era for the show. Instead of simply talking about comics and the industry surrounding them, your hosts have decided to change the show into an all-encompassing format that includes all forms of media. This could be comics, movies, music, video games, you name it.

For the inaugural episode of this newly reformed podcast, Dan and Mike talk about news regarding new Radiohead and Red Hot Chili Peppers songs, and move onto reviewing two new horror films, The Invitation and Green Room. Spoilers for both films begin 38 minutes in.