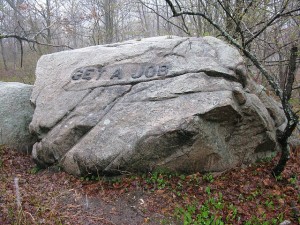 A “Babson Boulder” in Dogtown

There’s a small section of Cape Ann Massachusetts that the locals refer to as Dogtown but was once known as the Common Settlement. It was originally settled by farmers who enjoyed it’s distance from the sea as a buffer against pirates but had trouble planting due to its poor terrain. After the war of 1812, when fear of pirates was absent, many people moved away from Common Settlement in search of better land. After many families left the settlement it became reduced to abandoned houses and widows who didn’t see any reason to move. Many of the widows who stayed in the settlement would keep a dog for company but after the dogs started mating they soon outnumbered the people and Common Settlement became Dogtown. But there is more to the story of Dogtown than that.

As the dogs began outnumbering people, and after many of the widows died, they turned feral and intimidating. The abandoned houses of soon became a safe haven for vagabonds and other itinerants. Thomazine Younger, also known as “Queen of the witches,” was one of the last Dogtown citizens. Younger would curse the oxen that passed the settlement unless paid a toll by the driver. In 1830 the last person found in Dogtown, Cornelius Finson, was half dead lying in a cellar-hole. He was removed and taken to a poor-house where he died. A place once thought to be a haven was now one to be avoided at all costs. The story of Dogtown is the story of degradation; or, at least it was until  the Great Depression when Dogtown found a way to rise up and redeem itself. Enter Roger Babson.