The Infinite Canvas Podcast returns from a long hiatus to give you updates on how the DC Rebirth launch actually shaped up after all of the hype.

The Infinite Canvas Podcast train keeps on rollin’ with the tenth episode!

This time, Dan and Mike talk about issue 14 of Southern Bastards, Radiohead’s latest LP, and Uncharted 4. Last but not least, they give a spoiler-filled review of Captain America: Civil War.

This is a very special episode of the Infinite Canvas podcast, as Dan and Mike venture into a brand new era for the show. Instead of simply talking about comics and the industry surrounding them, your hosts have decided to change the show into an all-encompassing format that includes all forms of media. This could be comics, movies, music, video games, you name it.

For the inaugural episode of this newly reformed podcast, Dan and Mike talk about news regarding new Radiohead and Red Hot Chili Peppers songs, and move onto reviewing two new horror films, The Invitation and Green Room. Spoilers for both films begin 38 minutes in.

On this week’s episode of Infinite Canvas, Dan and Mike review 3 new titles from this week: Saga #36, Sex Criminals #15, and Batman #51.

They also talk about the woes that come with buying too many comics and not having the time to read them, and touch on Kanye West’s latest album, The Life of Pablo.

Dan and Mike are back this week to discuss the Brian K. Vaughan and Marcos Martin one-shot based in the world of The Walking Dead entitled The Walking Dead: The Alien. They also review the debut issue of Matt Kindt’s new whodunnit murder mystery set six miles deep in the ocean, Dept.H.

This week on the Infinite Canvas Podcast, Dan and Mike discuss the new books announced at the Image Expo and the leaked footage of the animated film version of Batman: The Killing Joke. They also talk about Wrestlemania, and give reviews for The Walking Dead #153 and Black Panther #1.

On this week’s (late) edition of the Infinite Canvas podcast, Dan and Mike talk about DC’s upcoming Rebirth relaunch, review issue 35 of Saga, and introduce the “Trade Waiting” feature. This feature will chronicle a series that has recently come to trade paperback format, with this week’s review being on Brian K. Vaughan and Cliff Chiang’s Paper Girls.

We have a special episode of Infinite Canvas today that is all about the new film “Batman v Superman: Dawn of Justice.” The podcast — also featuring our first ever guest — is spoiler-free for the first 22 minutes before we go into all of the details of the film.

This week on the Infinite Canvas Podcast, Dan and Mike discuss a multitude of topics that include reminiscing on their time at C2E2. They also touch on their admiration for the early parts of season 2 of Netflix’s Daredevil and review the penultimate issue in Scott Snyder and Greg Capullo’s seminal Batman run. 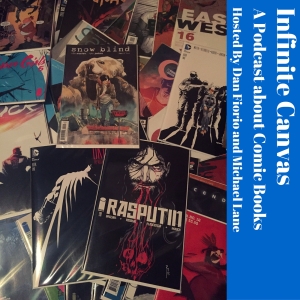 The Infinite Canvas podcast returns this week with our shortest episode (clocking in at a brisk 37 minutes), and it’s actually my favorite that we’ve done so far.

Listen as we talk through topics that include a prelude to C2E2 (Chicago’s yearly comic convention), a review of Grant Morrison and Sean Murphy’s Joe The Barbarian, and a look at our pick-ups from this week’s releases.