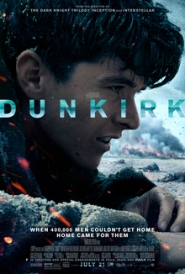 More than anything, what I felt walking out of Dunkirk, Christopher Nolan’s latest epic, was a strong sense of disappointment; almost assuredly the most I’ve felt for any film this year. And I’m as surprised as anyone that I felt this way about it. From the awe-inspiring trailers to the near-perfect critical acclaim, I thought I was guaranteed to love this. I was sure that Dunkirk would be what made me fall in love with Nolan’s work again, following Interstellar and The Dark Knight Rises, both of which I think are OK at best (and, to be honest, I don’t think Interstellar is much good at all). But instead, and rather unfortunately, Dunkirk continues the sad trend of middling work from one of the greatest directors alive. It makes me wonder if I’ll ever love a work of Nolan’s again, like I do his superb early films Memento, The Prestige, and The Dark Knight.

Dunkirk is set in a time of war, getting its namesake from a major battle that occurred early during World War II. It was heavily marketed as a straight war movie, but it’s really unlike any past examples — and I’m not so sure that’s a good thing. Actually, Dunkirk’s genre may be more akin to horror than that of which we typically think of as a war movie. We have characters who are at all times in danger, with no hope of defeating an unrelenting villain surrounding them. Their only hope being to possibly escape and survive the tragic event.

But don’t let my half-baked genre accreditation stray you. Above all else, this is without a doubt the work of Christopher Nolan, through and through. He takes an unsurprisingly unconventional approach to the story, splitting the film’s 107-minute runtime between three timelines, each focusing on separate characters. Our first timeline is dubbed ‘The Mole,’ and follows a young, quiet British soldier (Fionn Whitehead) over the course of a week who will do anything and everything he can to get back home. ‘The Sea’ takes place over the course of a day, as a British father and son duo (Mark Rylance and Tom Glynn-Carney), along with another school-aged boy (Barry Keoghan), are heading out on their civilian vessel to attempt at saving some of the British soldiers stuck on the French beach of Dunkirk. The final timeline, ‘The Air,’ focuses on a British air force pilot’s (Tom Hardy) harrowing hour in the air dogfighting Axis bombers as his fuel dangerously depletes.

These timelines seemingly intersect during the film and while I can appreciate the adherence to subverting genre conventions on paper, it eventually becomes near-impossible to keep the timelines straight as a first-time viewer of the film. It also doesn’t help when the main characters of the film (whom 90% of which I couldn’t even name) receive so little character development that I could barely find the willingness to care about what was happening to them on-screen. I’ve also seen so much praise being thrown at the acting in this film — be it for fan-favorite Tom Hardy or newcomer Fionn Whitehead or even One-Direction alum Harry Styles — but this was lost on me as well. The acting is fine, sure, and no one is by any means bad, but I just couldn’t find the incredible performances I was expecting.

Something I did like was how Nolan and editor Lee Smith cut the film in a way to allow for very little breathing room between action, constantly pushing us forward through one awful bombing raid to the next. However — and I’m certain these scenes would be exciting if watched piecemeal, and are without a doubt beautifully, painstakingly crafted to perfection — but the explosive action ceases to be interesting to watch, eventually becoming repetitive by the film’s halfway point. There’s only so many times I can watch yet another boat get bombed and sink to the bottom of the ocean, forcing hundreds of screaming British soldiers to plunge into the water with it. And this happens five or six times during the movie, which is honestly four or five times too many. Similarly, the dogfight scenes are just as monotonous after the third German plane is shot down the exact same way, and you can expect to double that number by the film’s conclusion. 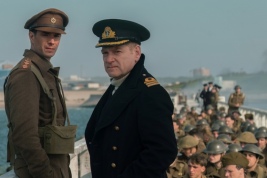 While the story, characters, and action mostly failed to grab me, Dunkirk is at the very least a technical feat. Nolan has always been a wonderful filmmaker no matter how much you enjoy his films, so this should come as no surprise. Cinematographer Hoyte van Hoytema will most definitely be up for an Oscar this upcoming year, and the film is just as aurally thrilling as it is visually appealing. The score from Hans Zimmer is exciting and integral to the film, while the sound design is impeccable. This is without a doubt one of the loudest films I’ve ever seen in a theater, and that’s a good thing.

But in the end, the few things I enjoyed about Dunkirk are heavily outweighed by the multitude of things I disliked. I expected so much more from Dunkirk. I expected this to be Nolan’s return to form. I expected to walk out of that theater ready to join the hype-train all the way to the Oscars. Instead, my final thoughts at the end of the night were, “I could have been playing Zelda instead.” I almost wish I had been.

One thought on “Strike Three, Mr. Nolan: A Review of “Dunkirk””