During project Acoustic Kitty the CIA implanted a microphone inside a kitten’s head and an antenna inside the same kittens tail with the hopes of turning it into the ultimate spy. Unfortunately, during the first test of their newest, cuddliest, agent, the cat, who was supposed to eavesdrop on a couple in a public park, ran out into traffic and was run over by a taxi. The Acoustic Kitty project was developed during the Cold War when the U.S. and Russia were so eager to get the upper hand that they were willing to try almost anything that seemed even slightly feasible. So, noting the kitten with the antenna tail, it’s not too hard to believe that during the Cold War the CIA invested a good deal of research into remote viewing.

Remote viewing is the practice of using one’s mind to detect far away or unseen objects. The CIA investigated the potential of remote viewing in Project Stargate where they claimed several successes and went so far as to claim that some of their subjects had achieved precognition. But before we had our own crop of psychic spies, and much before we had a movie about it starring George Clooney, we just had a man and his wife. Written by Upton Sinclair in 1930 Mental Radio is a self-published record of a series of experiments performed by the author and his second wife Mary Craig Kimbrough, a clairvoyant. And before you write Sinclair and the CIA off as a bunch of cooks, get this, Albert Einstein wrote the introduction when the book was published in Germany noting that Sinclair’s “good faith and dependability are not to be doubted.”

The premise of Mental Radio is that Upton Sinclair and his friends dew 290 doodles and it was up to Craig to reproduce the doodles without having seen them. Because this is a ridiculous and absurd conceit Sinclair makes sure to address his skeptics within the first chapter.

Among the objects of scorn, in my boyhood, was what we called “superstition”; and we made the term include, not merely the notion that the number thirteen brought you bad luck; not merely a belief in witches, ghosts and goblins, but also a belief in any strange phenomena of the mind which we did not understand. We knew about hypnotism, because we had seen stage performances, and were in the midst of reading a naughty book called “Trilby”; but such things as trance mediumship, automatic writing, table-tapping, telekinesis, telepathy and clairvoyance—we didn’t know these long names, but if such ideas were explained to us, we knew right away that it was “all nonsense.”
[…] But for thirty years the subject has been among the things I hoped to know about; and, as it happened, fate was planning to favor me. It sent me a wife who became interested, and who not merely investigated telepathy, but learned to practice it. For the past three years I have been watching this work, day by day and night by night, in our home. So at last I can say that I am no longer guessing. Now I really. know. I am going to tell you about it, and hope to convince you; but regardless of what anybody can say, there will never again be a doubt about it in my mind. I know!

If I were writing a book telling everyone about my psychic wife that’s how I’d start it too. (Look, no one believes in this stuff, right? But, maybe not all of it is pure bunk. I mean, that’s what my wife says and she’s a psychic!) From there Sinclair excuses himself from the role of the psychic apologist and becomes a full-fledged fan. The subsequent chapters detail the various experiments he and Craig performed, their successes, their failures, and what he thinks about them. Sinclair’s voice is wonderfully engaging and it’s hard not to get caught up in all the excitement.

[…] Late in the afternoon I phoned my secretary to make a dozen drawings; and then, after dark, Craig and I decided to drive to Pasadena, and on the way I stopped at the office and got the twelve sealed envelopes which had been laid on my desk. I picked them up in a hurry and slipped them into a pocket, and a minute or two later I put them on the seat beside me in the car.
After we had started, I said, “Why don’t you try some of the drawings on the way?” We were passing through the Signal Hill oil-field, amid thunder of machinery and hiss of steam and flashing of headlights of cars and trucks. “It will be interesting to see if I can concentrate in such circumstances,” said Craig, and took one envelope and held it against her body in the darkness, while I went on with my job of driving. […]

The above image is one of what Sinclair calls a partial success. Here when the drawing was that of a telephone Craig interpreted it as two cups. To me the partial successes are far more interesting than the totally successful copies because they often invoke the way we use objects in play. Another example of a partial success comes from Fig. 49 in which Craig tries to reproduce a drawing of a crab. 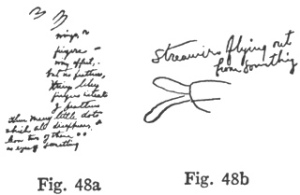 For the crab, Craig made two drawings, on opposite sides of the paper. The comments on the above read: “Wings, or fingers—wing effect, but no feathers, things like fingers instead of feathers. Then many little dots which all disappear, and leave two of them, O O, as eyes of something.” And then, “Streamers flying from something.”

Sinclair’s book is a mild curiosity that makes for a unique summer read as it’s is both interesting and light. Even though these experiments were not performed in a controlled scientific environment they were received with great fanfare from the scientific community. Of course whether or not you wish to believe any of this is up to you. I mean, if Craig was a real psychic how could she confuse claws with “wings, or fingers.” Still, I’ve certainly had fun reading about it.

So what do you think? Have you ever heard of remote viewing? Have you ever read Mental Radio? Please leave some comments below so that we can continue our discussion on psychic wives, confusing claws for fingers, and all those other wacky shenanigans our government gets mixed up it.